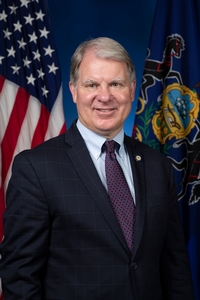 Arthur and Miriam (both deceased)

Senator David G. Argall represents the 29th District and serves as Chairman of the Senate State Government Committee. The first member from the 29th District to serve in a leadership position in the State Senate since 1861, he is the proud grandson of local Cornish, Welsh, and German farmers, coal miners and factory workers. Senator Argall’s top legislative priorities are promoting job growth, eliminating the school property tax burden on homeowners and revitalizing our downtowns and older industrial areas. He led the successful fight to pass a new anti-blight law which has been hailed as “a significant step forward for Pennsylvania” by newspapers across the state. In the Senate, he chaired a bipartisan Government Management and Cost Study Commission which unanimously recommended more than $400 million in savings to the taxpayer. Senator Argall has also played an active role in conservation initiatives, locally as a volunteer Scout leader and across the state as the author of the Waste Tire Recycling Act, which has helped to clean up more than 95 percent of Pennsylvania’s waste tires. The National Eagle Scout Association presented him with the Outstanding Eagle Scout Award for “distinguished service to his profession and community.” Senator Argall earned a bachelor’s degree from Lycoming College, where he earned the college’s highest student award. He earned a master’s degree and his Ph.D. in public administration from Penn State. His doctoral dissertation reviewed the benefits and drawbacks of Pennsylvania’s tax-free “Keystone Opportunity Zones” for economic development. As time permits, Dr. Argall serves as a part-time public policy instructor. He has been awarded a “Guardian of Small Business” by the National Federation of Independent Business and a “Defender of Liberty” by the American Conservative Union. Senator Argall lives in Rush Township with his wife, Beth, and two very active terriers.
View Larger Map