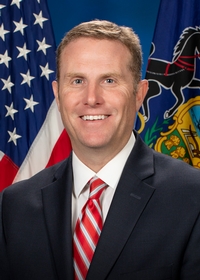 Senator Chris Gebhard was elected to serve the residents of the 48th Senatorial District in a special election on May 18, 2021. The district, which is composed of the heart of Pennsylvania Dutch Country, contains all of Lebanon County and portions of Berks and Lancaster counties.
In the 2023-24 session, he serves on the Aging and Youth; Banking and Insurance; Consumer Protection and Professional Licensure; Environmental Resources and Energy; Law and Justice; and Rules and Executive Nominations committees. Gebhard will serve as the chairman of the Community, Economic and Recreational Development Committee, which oversees the Department of Community and Economic Development.
A graduate of Vanderbilt University, Chris has spent the past 25 years working in the insurance field. He currently owns Hoaster Gebhard & Co., an insurance and risk management firm in Lebanon, PA.
Demonstrating his commitment to the community, Gebhard is an active member of numerous community organizations including: the Lebanon Lions Club, the Lebanon Community Library, Mt. Gretna Theatre and the Lebanon Valley Chamber of Commerce. He has previously served as a chairman and board member of the Lebanon Valley Chamber of Commerce.
During his time in office, Gebhard wants to protect our Constitutional individual liberties; ensure that Pennsylvania has secure and honest elections; strengthen the Commonwealth’s economy and schools; assist small business owners competing in a world of overregulation; and help draft fiscally responsible budgets that put families and taxpayers first.
A lifelong resident of Lebanon County, he resides in North Cornwall Township with his wife Sarah and their two sons, Davis and Drew.