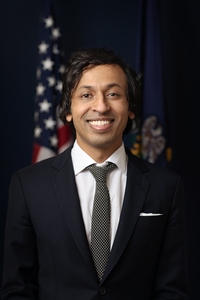 Senator Nikil Saval is a father, husband, writer, and organizer. He’s proud to be raising his sons, Ishaan and Mayukh, in South Philadelphia with his wife, Shannon Garrison, a historic preservationist. Saval’s organizing is deeply rooted in the labor movement. From 2009 to 2013, he was a volunteer labor organizer with UNITE HERE, organizing boycotts against luxury hotel developers to fight for the rights of housekeepers and helping to win back the jobs of noontime aides laid off because of Governor Tom Corbett’s budget cuts. Saval also has extensive experience in community and electoral organizing. In 2016, he was a leader in U.S. Senator Bernie Sanders’s presidential campaign. From this experience, Saval went on to co-found Reclaim Philadelphia, a progressive organization working for racial, gender, and economic justice throughout the Philadelphia area. In 2018, he organized campaigns to fight for change in the Democratic Party and was elected as Leader of Philadelphia’s Democratic Second Ward. Saval was the first Asian American to hold the position of Ward Leader in Philadelphia. In his career as a writer, Saval has been a frequent contributor to The New York Times and a contributing writer for The New Yorker, covering architecture, design, and housing. Saval previously served as co-editor of the literary journal n+1 and still serves on its board of directors. In 2014, Saval published his book Cubed: A Secret History of the Workplace. In Cubed, he examined the long-term evolution of the office from its roots in 19th century counting houses all the way to the cubicle, ultimately presenting a world in which workplaces, and the lives of the workers within them, could be improved in the future. Saval’s parents immigrated to the United States from Bangalore, India. In 1982, the year Saval was born, his parents opened a pizza restaurant, where Saval spent much of his childhood and adolescence. The employees of the restaurant were immigrants of all statuses, and Saval’s parents helped many of them secure documentation. His family’s experiences, as immigrants and as small business owners, were formative for Saval, giving shape to his perspective on workers’ rights. Much of Saval’s spring 2020 campaign for Pennsylvania State Senate took place against the backdrop of the COVID-19 pandemic and unprecedented global hardship. In response, his campaign transformed rapidly to a mutual aid hub. Saval is deeply committed to solidarity and justice for working people. He is fighting for a Philadelphia and Pennsylvania that works for the many and not the few.
View Larger Map