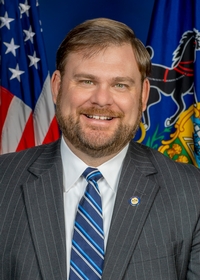 Joe Pittman was elected as the State Senator for the 41st Senatorial District in a May 21, 2019 special election to complete the unexpired term of Senator Don White, who retired on February 28, 2019, after 18 years of service. He was reelected for a full four-year term in November 2020. Senator Pittman serves as Chairman of the Senate Urban Affairs and Housing Committee and Vice Chairman of the Senate Environmental Resources & Energy Committee. He is a member of four additional Senate Committees: Appropriations, Banking & Insurance, Consumer Protection & Professional Licensure, and Judiciary. He also serves as the Senate Republican Caucus representative on the Pennsylvania Infrastructure Investment Authority (PENNVEST) Board of Directors. A leader in the effort to promote economic development, job creation initiatives, and strengthen the local economy, Senator Pittman has staunchly opposed the carbon tax under the Governor’s proposal that Pennsylvania join the Regional Greenhouse Gas Initiative (RGGI). The carbon tax would severely impact the region’s coal and electric generation sectors and potentially cause the loss of thousands of good paying, family-sustaining jobs. He is the prime sponsor of Act 26 of 2020 (Senate Bill 1122), which created a special $50 million grant program to ease the financial burden on fire companies and EMS stations created by the COVID 19 pandemic. Pittman served as White’s Chief of Staff through his tenure in office. In that role, Pittman developed strong working relationships with members of the General Assembly, legislative staff and officials across a number of state agencies. He also worked closely with county and local governments and civic organizations to foster and promote economic development and infrastructure improvement efforts to enhance to quality of life for the region. A 1995 graduate of Purchase Line High School, Pittman was appointed to its school board and served until his graduation from Penn State University with a Bachelor’s Degree in Political Science in December 1998. Pittman is a life member of the NRA, member of the Indiana County Republican Committee, Ford City Sportsmen’s Association, and the Indiana-Franklin Lodge #313. He serves on the Purchase Line Red Dragon Foundation, which provides scholarships to Purchase Line graduates. He is a board member of the United Way of Indiana and chaired its 2018 annual campaign, helping to raise over $726,000 to benefit various community-based programs. Pittman and his wife Gina (DiMaio) have four children: Joe Jr., Sam and twin girls Rosie and Frannie. They are members of the St. Thomas More University Parish in Indiana.
View Larger Map