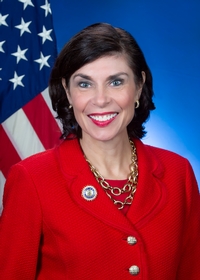 Kristin Phillips-Hill was elected to serve York County residents in the Pennsylvania Senate in 2018 after serving two terms in the House of Representatives.
A fiscal hawk, Kristin is a strong supporter of making tax dollars more transparent and accountable to the people who pay the bills. A government watchdog publication deemed Kristin as “exceeds expectations” as one of four lawmakers who publicly post their Senate expenses.
She sponsored six laws as a senator, ranging from significant human trafficking legislation to honoring veterans to remote learning that paved the way for continuity of education during the COVID-19 pandemic.
Kristin continues to support small businesses through regulatory and tax reforms. She also sought solutions to allow locally owned businesses to open when the governor unilaterally shut them down.
She chairs the Senate Communications and Technology Committee, where she has advanced an aggressive agenda to close the digital divide, as well as modernize the Commonwealth’s IT infrastructure and cybersecurity.
Kristin earned a bachelor’s degree in political science and a master’s degree in public policy from Rutgers University.
Kristin resides in York Township with her husband Rick. They have three children: Victoria, Gavin and Spencer.