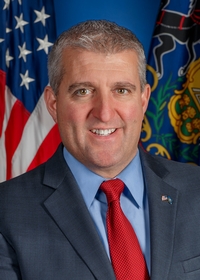 Senator Frank Farry was elected to the Senate of Pennsylvania in November 2022 to represent the 6th Senate District in Bucks County.
While serving in the House of Representatives for seven terms, Farry advanced legislation to designate cancer as an occupational disease for firefighters, offering protection to both career and volunteer firefighters who develop cancer as a result of their service. He also championed public safety measures to require carbon monoxide alarms in multi-family dwellings. Farry was instrumental in advancing legislation now known as the Motor Vehicle Extreme Heat Protection Act, providing protections for animals left in unattended vehicles. He has also authored legislation establishing the Safe2Say Something program, which provides methods of anonymous reporting concerning unsafe or potentially harmful, dangerous, violent, or criminal activities in schools or to individuals. Additionally, he played a major role in expanding the income eligibility limits for the PACENET prescription drug assistance program for seniors and preventing minors from the dangers of indoor tanning.
Farry’s advocacy efforts have led to recognitions from veterans’ and armed forces groups, the disability community, animal welfare groups and addiction and recovery advocates. Specifically, Farry’s efforts fighting for our children’s safety and educational opportunities has led to numerous recognitions including Pre-K for PA, early education organizations, local scouting troops and both the Lifetime Dedication to Safety and the Families Community Champion Award from the Safe Kids Coalition. Known as a leader in Pennsylvania on first responder issues, Farry has fought hard to ensure our first responders’ health and welfare is a priority, as well as making sure they have the resources needed to keep our community safe. He has been honored by the Pennsylvania Fire and Emergency Services Institute; the Fireman’s Legislative Federation of Pennsylvania – James Baird Award; the Pennsylvania Heart Rescue Project; Philadelphia Firefighter and Paramedic’s Union, Local 22 – Friend of the Firefighters Award; Kidde Fire Safety Corporation and local police organizations. Additionally, Farry’s commitment to legislative issues that benefit health and human service providers and the individuals who receive those services earned him the 2022 Legislative Leadership award by the Rehabilitation and Community Providers Association (RCPA).
Farry is very active in his community, serving as a volunteer firefighter with the Langhorne-Middletown Fire Company since June 1990 and as chief of the organization since January 2001. He currently serves on the board of trustees for Bucks County Community College and has served on numerous township and county boards and commissions. Farry is also a past board member of the Middletown Community Foundation and the Lower Bucks Chapter of the American Red Cross, as well as the past president of the Bucks County Consortium of Municipalities.
Since his swearing-in, Farry has been appointed chair of the Urban Affairs and Housing committee, vice chair of the Consumer Protection and Licensure committee, and is a member of the Appropriations, Communications and Technology, Community, Economic, and Recreational Development, Health and Human Services, and Law and Justice committees.
Prior to his time in state government, Farry worked for his hometown of Middletown Township for over seven years. In his role as assistant township manager and director of community services, Farry served in various capacities including acting township manager, public information officer and emergency management team member.