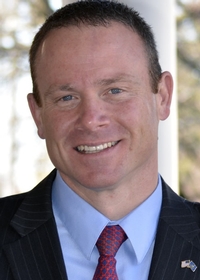 Scott Martin is a lifelong Lancaster County resident with deep roots in the community. He was elected to his first term representing the 13th Senatorial District in November 2016 and re-elected in 2020.
While in the Senate, dozens of Scott’s bills have become law as well as a Constitutional Amendment which was approved by the voters of the Commonwealth in May of 2021 that limits a Governor’s emergency declaration to 21 days unless the General Assembly approves a longer duration. It also allowed the General Assembly the ability to end a Governor’s emergency declaration through a joint resolution by the Senate and House that cannot be vetoed by a Governor.
Scott currently serves as Chair of the Senate Education Committee, and serves on the Appropriations, Environmental Resources and Energy, and Judiciary Committees. In addition, Scott serves on the PA System of Higher Education Board of Governors, Chesapeake Bay Commission, PA Athletic Oversight Committee (Chairman), Pennsylvania Higher Educational Facilities Authority, State Public School Building Authority, Education Commission of the States, Adult and Family Literacy Interagency Coordinating Council and Special Education Funding Commission.
Prior to his election to the state Senate, Scott served two terms as an elected Lancaster County Commissioner and helped to clean up what had become a dysfunctional and ineffective government. As Commissioner, Scott never voted for a tax increase, downsized government by cutting duplicative agencies and departments, reduced debt by $40 million, and lowered costs for taxpayers through privatization and public employee benefit reform.
He led many statewide reform efforts through the County Commissioners Association of Pennsylvania and was elected Chair of the Republican Caucus of County Commissioners for 8 years. Before entering public service, Scott was successful in the private sector as a longtime licensed Realtor and local landlord. In addition, for 13 years, he worked in the Juvenile Justice system, serving as Director of the Lancaster County Youth Intervention Center.
Running the county’s juvenile detention and emergency shelter-care facility, he oversaw the effective operation of a $5.5 million budget and 150 employee organization. Scott was also the elected Vice President of the Juvenile Detention Centers Association of Pennsylvania and served on the Pennsylvania Commission on Crime & Delinquency’s Detention Steering Committee.
Scott served on the Board of Directors of the Dr. Gene A. Carpenter Football Foundation, volunteers as a youth sports coach in wrestling and football, and gave his time and effort to groups like the United Way of Lancaster County and the former Pennsylvania Dutch Convention & Visitors Bureau.
Scott is a graduate of Lancaster Catholic High School where he was a PIAA State Wrestling Champion, National Heavyweight Wrestling Champion, and ASICS High School All-American, and additionally was an All-Star on the football field. He continued his academics and sports at Millersville University, where he graduated with a degree in Sociology/Criminal Justice and became a three-time 1st Team PSAC Defensive Tackle and two-time All-American, including being named a Kodak 1st Team All-American. After his college career, Scott was a free agent camp invitee of the New York Giants in the NFL and had three different stints in the Arena Football league.
Scott has been inducted into the Lancaster Catholic Athletic Hall of Honor, the Millersville University Athletic Hall of Fame, the Lancaster-Lebanon League Wrestling Hall of Fame, the District III Wrestling Hall of Fame, the Lancaster County Sports Hall of Fame and the Pennsylvania Sports Hall of Fame, Susquehanna Valley Chapter. Recently, in recognition of the 150th anniversary of college football, Scott was named one of the 150 greatest players/contributors in the Pennsylvania State Athletic Conference history.
Scott and his wife Amber own a small family business and live in Martic Township, Lancaster County with their four wonderful children, three dogs and three cats.
View Larger Map