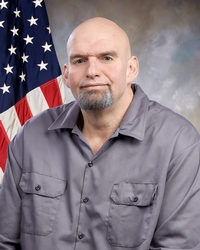 President of the Senate

Pennsylvania born and raised, John was born to teenage parents who were just starting out on their own. At the time, his father worked nights to put himself through college. John grew up in York, and later followed in his father’s footsteps to Albright College, where he played offensive tackle for the Lions. At 23, John joined up with Big Brothers/Big Sisters and threw himself into the program, mentoring his ‘little’ – an 8-year-old boy who had recently lost his father to AIDS and whose mother was also battling the disease. Before she passed away, John promised that he would continue to look out for her son and make sure that he would graduate college. Fifteen years later, John and his ‘little’ had both held up their ends of the bargain, with his little’s graduation from Washington and Jefferson College in Washington, PA. The disparity between his own life and that of his ‘little’ motivated John to quit his job and join AmeriCorps, where for two years he served in Pittsburgh’s historic Hill District, helping to set up the first computer labs in the neighborhood and teaching GED classes to young mothers and fathers. He went on to earn a Masters in Public Policy from Harvard’s Kennedy School of Government, where he focused on finding solutions in social work, business, and public policy to confront urban challenges and economic inequality. John then returned to Pennsylvania to start a GED program in the town of Braddock. John saw the beauty, grit, and determination that had been in the community’s roots for generations, and focused on turning Braddock, a town facing many obstacles, into a thriving and growing community. In 2005, encouraged by his students and motivated to do more to address the inequality that was plaguing his community, John ran for mayor. He managed to win the crowded primary by a single vote, and he’s been hard at work ever since. During the last 12 years as mayor, John has worked to build Braddock back from the verge of extinction. He’s applied a hands-on approach from AmeriCorps and his service experience to take steps to rebuild his community, bringing creative urban policy solutions to Braddock. He has worked with young people and artists to transform creative spaces downtown, and turned abandoned properties into urban gardens. John has worked to attract new residents and new jobs, as more than a dozen businesses have relocated into Braddock and the population has stabilized for the first time in decades. He is most gratified, though, by breaking the cycle of violence in his community that culminated with nearly 5 ½ years without the taking of a life. John is proud of what they’ve achieved in Braddock, but wanted to do more not only for his community, but for his commonwealth, and has emerged as one of Pennsylvania’s leading progressive voices for working people, running on issues like inequality, racial justice, and ending the failed war on drugs. He is honored to have been chosen by the voters of this commonwealth to serve as the 34th lieutenant governor of Pennsylvania. John, his wife Gisele, and their three children Karl, 9, Gracie 7, and August, 4, live in a restored car dealership in Braddock.