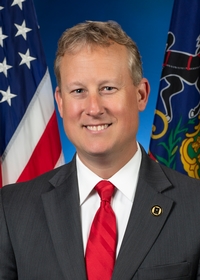 Raised in the ideals of his Pennsylvania home and tested on the field of combat defending his nation, Ryan Aument is committed to ensuring a prosperous and economically competitive Commonwealth for all. A lifelong resident of Lancaster County, Ryan currently lives in West Hempfield with his wife, Kate, a teacher at Mt. Calvary Christian School, and their two children, Jack and June. He is a member of the Mountville VFW Post 8757, the Lancaster County Career and Technology Foundation, the Lancaster County Metropolitan Planning Organization, the Pennsylvania System of Higher Education Board of Governors, and the Pennsylvania Higher Education Assistance Agency. The Aument family worships at Grace Church at Willow Valley.

After serving in the United States Army, Ryan spent three years as a production supervisor at ICI Paints in Reading, while also winning a seat on the Quarryville Borough Council. He later managed the state House campaign of a high school friend, Bryan Cutler. After Cutler won office, he hired Ryan as a key aide. Ryan then won office as Lancaster County Clerk of Courts and went on to win two terms in the State House and later, two terms in the State Senate, where he served as chair of the Senate Education Committee and the Senate Communications and Technology Committee. Along with representing the constituents of the 36th State Senatorial District, Ryan also formed and now chairs the first ever Nuclear Energy Caucus in a state legislature in the nation and serves as Majority Caucus Secretary for the Senate Republican Caucus. During his tenure, Ryan secured his status as a government reformer by helping to establish the Office of State Inspector General, an office tasked with preventing, detecting, and eradicating fraud in Pennsylvania government. He also introduced legislation, signed into law by Gov. Wolf, promoting stronger restrictions and penalties for the misuse of SNAP benefits, protecting dollars meant to feed hungry Pennsylvanians.

Ryan served as a U.S. Army captain in Operation Iraqi Freedom, briefly commanding an infantry company of 150 soldiers after the company commander was wounded in combat. Throughout his military service, he earned the Bronze Star Medal, the Army Commendation Medal, the Army Achievement Medal, and the Army Parachutist Badge.